How to Kill Your Company 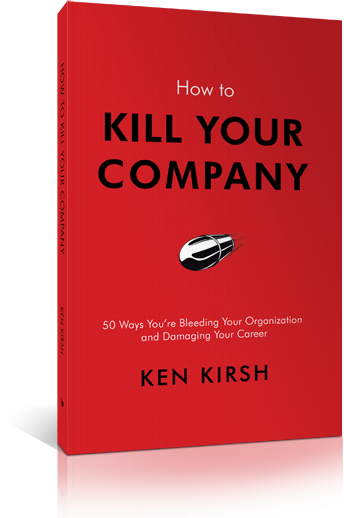 Are you killing your company? Test yourself now!

“How to Kill Your Company is a short and wonderful romp of a book. Ken Kirsh provides us with the fastest way I’ve ever seen to help every leader become more self-aware, and in turn, build companies that thrive rather than fail.” Robert Sutton, Stanford Professor and author of the New York Times
bestsellers Good Boss, Bad Boss and The No Asshole Rule.

“Ken Kirsh’s book, How to Kill Your Company, is an intellectual shot in the brain. If you buy it, read it, study it, and put it into action, it will prevent you from shooting yourself in the foot and in the wallet.” Jeffrey Gitomer, New York Times bestselling author of
Little Red Book of Selling

“When it comes to building a successful business or career, knowing what to do is only half the game. The other half is knowing what not to! That's exactly what Ken Kirsh reveals, with precision and in-your-face clarity.” Barbara Corcoran, Star of Shark Tank,
Business Expert, Real Estate Mogul

“For small businesses or big, Kirsh delivers 50 punchy and powerful don't do's that apply to CEOs, clerks and every employee in between.” Chris Altizer, Senior Vice President Human Resources
Pfizer

"Direct and intelligent.
I dare you not to read it." James Carville

Buy the book or
e-book online at:

The Pareto Principle, known as the 80/20 rule, is commonly used to describe how 20% of something (the vital few) is responsible for 80% of the result (the trivial many). For example, 20% of a company's sales force might produce 80% of its sales, or 80% of a company's revenue is generated by 20% of its clients.

This concept of uneven distribution, or disproportionate cause and effect, applies to many situations and relationships, and it served us well in the twentieth century.

However, in my observation, it's mathematically obsolete. The vital few are fewer, and the trivial many are greater. The relationship is more disproportionate than ever before.

Would you like me to prove it? I can't. Any more than the original 80/20 rule can be proven. After all, it's a concept—not a law.

Perhaps you, too, have observed the degeneration of competence, performance, reliability, empathy, service, attitude, quality, effort, and productivity, among other things. Nearly anything of significance is now driven by an even more vital few.

Your company cannot afford for you to be trivial. So, if it's 95/5 now, how can everyone in your company be in the vital 5%?

That's why you're reading this book—and why you must be the vital exception to the trivial rule.

Currently available for seminars. Learn more about them or book one now!